Did you get this letter in the mail? MidAmerican letter about RECs 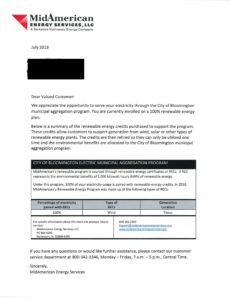 This letter is from your electric supplier informing you where they used the renewable energy credits (RECs) they purchased as part of your green energy supply plan. The Town of Normal and the City of Bloomington went through an electric aggregation process for everyone in their municipalities serviced by Ameren. Both the City and the Town chose MidAmerican as the alternative energy supplier through June 2020. Everyone in Bloomington and Normal that gets their electricity bill from Ameren has MidAmerican as their energy supplier unless they opted out of the program.

With green plans, the energy supplier pledges to buy RECs from a company that produces power from renewable sources, such as wind. That renewable energy producer agrees to produce and deliver an amount of renewable energy to the grid that is equal to the amount of energy you consumed. In this case, MidAmerican purchased RECs from a wind producer that generated wind electricity in Texas. That is what this letter is telling you.

Getting energy from a supplier with this green option is an investment in renewable energy; however, it is generally not local.

There are many options for energy supply and energy production, and right now, in Illinois the renewable energy market is growing due to the Future Energy Jobs Act. The Ecology Action Center is here to help you make sense of all the options available to you, so please reach out if you have questions about electrical aggregation, alternate energy suppliers, community solar, or rooftop solar. Contact Larissa Armstrong at 309-454-3169 x15.

Spread the love
Bookmark the permalink.